To find photos, more things to do, ratings, and other tourist information, go to the Cabo San Lucas online route builder.

Things to do in Cabo San Lucas

Discover out-of-the-way places like Nature & Wildlife Tours and El Centro. Your cultural itinerary includes sights like Parish of Our Lady of Guadalupe and Zona Romantica. You'll find plenty of places to visit near Puerto Vallarta: Museo Casa Tequilera (in Bucerias) and Dressel Divers (in Punta de Mita). And it doesn't end there: appreciate the extensive heritage of Old Vallarta, browse the exhibits of Galeria Colectika, take a leisurely stroll along Malecon Boardwalk, and enjoy breathtaking views from Faro de la Calle Matamoros.

Traveling by flight from Cabo San Lucas to Puerto Vallarta takes 6 hours. Alternatively, you can fly; or do a combination of bus and ferry; or drive. The time zone difference moving from Mexican Pacific Standard Time (MST) to Central Standard Time (CST) is 1 hour. June in Puerto Vallarta sees daily highs of 36°C and lows of 28°C at night. Finish your sightseeing early on the 9th (Wed) to allow enough time to travel to Mexico City.
more less

Things to do in Puerto Vallarta

©
Parish of Our Lady of Guadalupe 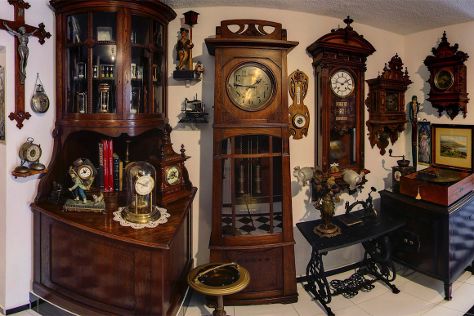 For maps, where to stay, ratings, and tourist information, you can read our Mexico City journey maker site.

You can fly from Puerto Vallarta to Mexico City in 3.5 hours. Other options are to fly; or drive; or do a combination of taxi and bus. Expect slightly colder temperatures when traveling from Puerto Vallarta in June; daily highs in Mexico City reach 28°C and lows reach 16°C. Cap off your sightseeing on the 13th (Sun) early enough to travel to Oaxaca.
more less

Capital city of the eponymous state, Oaxaca relies heavily on its colonial charm, its core a maze of tree-shaded alleys flanked by photogenic mansions, government buildings, and old churches.

You'll discover tucked-away gems like Monte Alban and Convento de San Jeronimo. Get some cultural insight at Templo de Santo Domingo de Guzman and Temple Tlacochahuaya. Take a break from Oaxaca with a short trip to Zona Arqueologica Zaachila in Zaachila, about 32 minutes away. There's lots more to do: tour the pleasant surroundings at Coyote Aventuras, contemplate the long history of Ex-Convento de Santa Catalina, make a trip to Santa Maria de la Asuncion, and take in the exciting artwork at Voces de Copal.

You can fly from Mexico City to Oaxaca in 3 hours. Other options are to drive; or take a shuttle. When traveling from Mexico City in June, plan for somewhat warmer days in Oaxaca, with highs around 34°C, while nights are about the same with lows around 18°C. Wrap up your sightseeing on the 16th (Wed) to allow time to travel to Merida.
more less

Things to do in Oaxaca

Gran Museo del Mundo Maya and Museo Becal are good opportunities to explore the local culture. Discover out-of-the-way places like Dzibilchaltún and Palacio de Gobierno del Estado de Yucátan. Get out of town with these interesting Merida side-trips: Hacienda Yaxcopoil (in Yaxcopoil) and Yucatan Snook (in Chuburna). The adventure continues: contemplate in the serene atmosphere at Merida Cathedral, explore the world behind art at Museo de Arte Popular, browse the exhibits of Nahualli Casa de los Artistas, and examine the collection at Casa Museo Montes Molina.

To see other places to visit, where to stay, ratings, and more tourist information, read Merida travel route planner.

Fly from Oaxaca to Merida in 7.5 hours. Alternatively, you can drive; or take a bus. The time zone changes from Central Standard Time to Eastern Standard Time, which is usually a 1 hour difference. Expect somewhat warmer temperatures when traveling from Oaxaca in June; daily highs in Merida reach 41°C and lows reach 28°C. Cap off your sightseeing on the 20th (Sun) early enough to go by car to Chichen Itza.
more less

Things to do in Merida

For reviews, other places to visit, where to stay, and other tourist information, read Chichen Itza online itinerary builder.

Traveling by car from Merida to Chichen Itza takes 2 hours. Alternatively, you can take a shuttle; or take a bus. In June, plan for daily highs up to 38°C, and evening lows to 30°C. Finish up your sightseeing early on the 22nd (Tue) so you can travel to Isla Mujeres.
more less

Discover out-of-the-way places like Punta Sur and Dolphin & Whale Watching. Do some cultural sightseeing at PARROQUIA INMACULADA CONCEPCIÓN and Guadalupe Chapel. There's much more to do: take in the architecture and atmosphere at Iglesia Del Sagrado Corazon, see the interesting displays at Captain Dulche's Museum, kick back and relax at Playa Norte, and tour the pleasant surroundings at El Farito.

For ratings, reviews, and other tourist information, go to the Isla Mujeres holiday builder tool.

Things to do in Isla Mujeres

On the 26th (Sat), get up close to creatures of the deep with a dolphin and whale watching tour. On the 27th (Sun), you'll have a packed day of sightseeing: pause for some serene contemplation at Parroquia de Cristo Resucitado, then explore the ancient world of Zona Arqueologica El Rey, and then browse the different shops at La Isla Shopping Village.

Traveling by ferry from Isla Mujeres to Cancun takes 1.5 hours. Alternatively, you can do a combination of ferry and bus. June in Cancun sees daily highs of 36°C and lows of 29°C at night. Cap off your sightseeing on the 27th (Sun) early enough to travel to Cozumel.
more less

Thanks to the island's outstanding scuba diving and snorkeling options, Cozumel tourism sector remains a major employer and the main source of income for this Caribbean getaway.

Kick off your visit on the 28th (Mon): explore the ancient world of San Gervasio Mayan Archaeological Site, then stop by Sergio's Silver from Taxco, and then see some colorful creatures with Go Divers. Get ready for a full day of sightseeing on the 29th (Tue): see the vivid underwater world at Parque Nacional Arrecifes de Cozumel, see the vivid underwater world at Columbia Reef, and then indulge in some personalized pampering at some of the best spas.

Plan my Cozumel trip by asking Inpirock to come up with tips and suggestions. 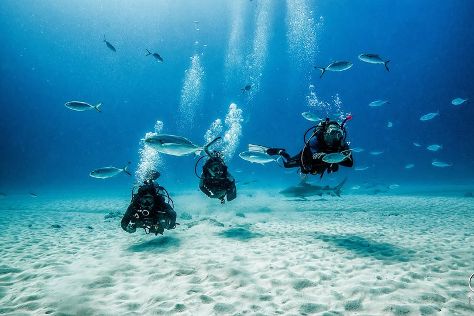 ©
Start off your visit on the 30th (Wed): delve into the distant past at Zona Arqueológica del Cedral and then explore the gorgeous colors at Chankanaab Reef. On the 1st (Thu), you'll have a packed day of sightseeing: explore the world behind art at Galo Art Studio, then discover the deep blue sea with CozuDive Diving & Snorkeling, and then see the vivid underwater world at Paseo El Cedral Reef.

To find photos, where to stay, maps, and more tourist information, read our Cozumel trip planner.

Finish your sightseeing early on the 2nd (Fri) to allow enough time to ride a ferry to Playa del Carmen.
more less

Your cultural itinerary includes sights like Nuestra Senora del Carmen Catholic Church and Zona Arqueologica Playa del Carmen. Discover out-of-the-way places like Shark Diving and Skydiving. Go for a jaunt from Playa del Carmen to Puerto Morelos to see Nature & Wildlife Tours about 36 minutes away. There's still lots to do: stroll through Chikin Ha, admire the masterpieces at Museo Frida Kahlo, browse the exhibits of Ambarte, and soothe aching muscles at some of the top local wellness centers.

To find more things to do, ratings, and other tourist information, use the Playa del Carmen trip planning tool.

Traveling by ferry from Cozumel to Playa del Carmen takes 1.5 hours. In July, daily temperatures in Playa del Carmen can reach 35°C, while at night they dip to 26°C. Wrap up your sightseeing on the 5th (Mon) early enough to drive to Tulum.
more less

Get some cultural insight at Tulum Archaeological Site and Muyil. Eschew the tourist crowds and head to Multum Ha Cenote and Art Gallery Miniature. Change things up with a short trip to Cobá Zona Arqueológica Cobá in Coba (about 48 minutes away). There's lots more to do: get outside with Xel-Ha Park by Xcaret, stroll through Cenote Car Wash, Head underground at Cenotes Casa Tortuga Tulum, and take in panoramic vistas at Tulum Tower.

For ratings, where to stay, maps, and tourist information, use the Tulum online trip builder.

Traveling by car from Playa del Carmen to Tulum takes an hour. Alternatively, you can take a bus. In July in Tulum, expect temperatures between 35°C during the day and 26°C at night. Finish up your sightseeing early on the 8th (Thu) so you can catch the shuttle to Bacalar.
more less

©
Bacalar is the municipal seat and largest city in Bacalar Municipality (until 2011 a part of Othón P. Get a sense of the local culture at Dzibanche and Zona Arqueologica Oxtankah. Eschew the tourist crowds and head to Lake Bacalar and The GAIA Experience. Get out of town with these interesting Bacalar side-trips: Xpujil Town (Xpuhil & Zona Arqueológica de Xpuhil). There's still lots to do: take an in-depth tour of Fuerte de San Felipe, explore the ancient world of Pyramid of the Masks, get outside with Stromatolites in Bacalar Rapids, and relax and rejuvenate at Masajes Txape.

For ratings, reviews, other places to visit, and more tourist information, read our Bacalar visit planner.

Getting from Tulum to Bacalar by shuttle takes about 3 hours. Other options: drive; or take a bus. While traveling from Tulum, expect a bit warmer days and about the same nights in Bacalar, ranging from highs of 40°C to lows of 29°C. Finish up your sightseeing early on the 13th (Tue) so you can travel back home.
more less