You've now added Torre Escenica to your itinerary. Explore the numerous day-trip ideas around Cancun: Isla Mujeres (Punta Sur & Playa Norte). There's much more to do: explore the ancient world of El Rey Archaeological Zone, make a trip to El Parque de las Palapas, kick back and relax at Playa Tortugas, and shop like a local with Kukulcan Plaza. 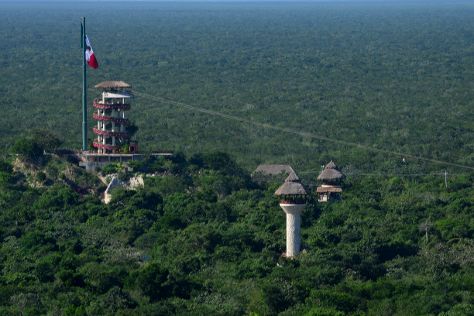 Your day-by-day itinerary now includes Rio Secreto as well as Xplor Park by Xcaret. Start off your visit on the 21st (Thu): whizz through the canopy at Xplor Park by Xcaret and then don't miss a visit to Quinta Avenida. On the 22nd (Fri), you'll have a packed day of sightseeing: explore the fascinating underground world of Rio Secreto, then explore the fascinating underground world of Parque Dos Ojos, then explore the ancient world of Cobá Zona Arqueológica Cobá, and finally delve into the distant past at Temple of the Bearded Man.

To see other places to visit, ratings, maps, and tourist information, refer to the Playa del Carmen visit planner .

Traveling by car from Cancun to Playa del Carmen takes an hour. Alternatively, you can take a bus. In November in Playa del Carmen, expect temperatures between 81°F during the day and 69°F at night. Wrap up your sightseeing on the 22nd (Fri) early enough to drive to Chichen Itza.
more less

To find more things to do and other tourist information, go to the Chichen Itza trip planner .

You can drive from Chichen Itza to Cancun in 2.5 hours. Other options are to take a shuttle; or take a bus. Plan for little chillier nights when traveling from Chichen Itza in November since evenings lows in Cancun dip to 70°F. You'll have a few hours on the 24th (Sun) to wrap things up before traveling to Mexico City.
more less

Historic Center (Centro Historico) has been added to your itinerary. Kick off your visit on the 24th (Sun): wander the streets of Historic Center (Centro Historico) and then see the interesting displays at Museo del Azucar. Get ready for a full day of sightseeing on the 25th (Mon): don't miss a visit to Zona Arqueológica de Teotihuacan Estacionamiento Puerta 5, then pause for some serene contemplation at Iglesia Nuestra Senora del Pilar “La Ensenanza”, and then appreciate the extensive heritage of Zocalo.

For where to stay, reviews, photos, and tourist information, refer to the Mexico City trip itinerary planner .

You can fly from Cancun to Mexico City in 5 hours. Other options are to do a combination of flight and bus; or drive. The time zone changes from Eastern Standard Time to Central Standard Time, which is usually a -1 hour difference. When traveling from Cancun in November, plan for a bit cooler days and cooler nights in Mexico City: temperatures range from 72°F by day to 49°F at night. Finish your sightseeing early on the 26th (Tue) so you can travel to Mexico City.
more less

Before you visit Mexico City, use our trip planner to discover what you can do and see there.

You will have some time to spend on the 30th (Sat) before leaving for home.
more less